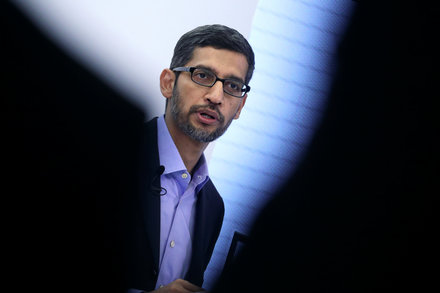 Facebook’s Mark Zuckerberg and Google’s Sundar Pichai have journeyed to Brussels as the European Union drafts regulation for A.I. and the digital economy.

In the US there must be some kind of tech regulation balancing innovation and individual’s and society’s best interest. We cannot rely on business driven tech companies to do that for us.The key word here is PROFIT above all else and the interest of the consumers/users is often an afterthought or non-existent.

“Europe’s A.I. debate is part of a broader move away from an American-led view of technology. For years, American lawmakers and regulators largely left Silicon Valley companies alone, allowing the firms to grow unimpeded and with little scrutiny of problems such as the spread of disinformation on social networks.”

““Technology is fragmenting along geopolitical lines,” said Prof. Wendy Hall, a computer scientist at Southampton University, who has been an adviser to the British government on artificial intelligence.”

“In the interview, Ms. Vestager compared Europe’s more assertive stance in tech regulation to its regulations of agriculture. Many pesticides and chemicals that are allowed in the United States are banned in Europe”.

"“It is quite the European approach to say if things are risky, then we as a society want to regulate this,” she said. “The main thing is for us to create societies where people feel that they can trust what is going on.”"7

Thank you @richard1, I found this issue fascinating.

Most interesting are the ways humane rights related technology are perceived in Western Europe compared to most of the rest of the world. It seems that the idea that direct human rights related to technology is more important than the economic benefits of less regulated technology, which itself also leads to human progress. The question is the trade-off between the human progress gained from the economic benefits vs the direct humane rights.

Another fascinating point is that it’s been said that since technology moves so fast, that regulators start way too late and also that can never catch up with it. By the time a new regulation is passed, the technology is often already going out of style.

Not to mention that technology companies often work in the dark anyway, so adding regulation often just becomes useless drudgery which actually rewards companies that cheat and punishes those that don’t. For example with GDPR, almost no companies are honest with compliance – it’s usually just a smokescreen. Those fools that do actually follow the rules accurately are punished severely in lost revenues, and the honest companies fall behind the rest.

“It is quite the European approach to say if things are risky, then we as a society want to regulate this,”

This quote says it all about Western European culture. I’ve had many friends from Western Europe who complain about as much, it’s about the culture where trying new ideas is deemed risky and even seen as crazy.

“In the interview, Ms. Vestager compared Europe’s more assertive stance in tech regulation to its regulations of agriculture. Many pesticides and chemicals that are allowed in the United States are banned in Europe”.

How could someone possibly accurately compare the world’s oldest industry with the world’s newest one? Agriculture is a slow-moving industry. Technology is infinitely faster and more complex.

Still regulating technology may be a good idea at times – especially when it comes to fighting monopolies. I suggest Western Europe spends its energies killing the illegal monopolies of the likes of Google and others – something which will help the economy and human progress – rather than trying to throw more bureaucracy into Western European tech.

How could someone possibly accurately compare the world’s oldest industry with the world’s newest one? Agriculture is a slow-moving industry. Technology is infinitely faster and more complex.

Hehehe. You really should pay more attention to what’s going on. This sounds like something out of the mouths of Silicon Valley navel-gazers with open office plans, oblivious to how industries that aren’t solely focused on pushing bits to screens are rapidly changing.

@greg Sorry if I didn’t make myself clear. When I said (information) technology was fast and complex, I meant that the mechanics of information tech are more complex than agriculture. So comparing something simple like regulating pesticides to Western Europe’s cynical self-harming attempts to ineffectively regulate technology shows just how dangerously clueless these academics and lawmakers are.

Regarding speed, yes I overstated the speed difference. However I was right that clearly the information technology industry is still changing many times faster than agriculture. I shouldn’t have said “infinitely faster”, rather “much faster”.

Also I dislike open offices, and actually offices in general.