Rise in Anger and Social media 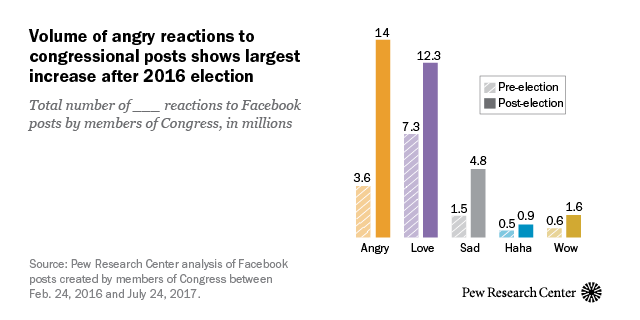 
Rodger Mcname said in an interview on NPR that anger reaction was one of the items the facebook algorithm keys off of in determining the order of items in your feed (placing things that elicit anger making the top 10 in your feed. I have been trying to find out if this claim is true. I am interested in the overall rise of anger in the culture since the election. The Pew study seems to look only at congressional posts. Anyone working in this area?
Diana
healthyswimmer August 18, 2018, 3:44pm #2

If you are interested in knowing regional anger barometers… know rode rage in the San Francisco Bay Area is on the rise… The only 2 times I drove through the middle of San Francisco in the past 2 weeks I was purposely hit by other drivers in traffic- one by throwing something at my car because I wasn’t going fast enough and another hitting my car by accident? and screaming at me and then driving off… I called police both times and they said hostility has really risen in the past year. This was a wake up call for me to the new culture of anger. I’m sure these people use anger emojis- anger has replaced frustration- when people are frustrated they talk it out and feel better- today people don’t talk things out.

I’m experiencing the same thing in DC. The driving has gotten really crazy, and as a pedestrian and runner I have to be hugely careful and defensive. As a driver, I have to be defensive and I try to very intentionally slow down and be even more careful than ever because I realize that anger is contagious and I do not want to hurt anyone nor do I want to experience anger all the time. It’s so noticeable - it’s nuts, and scary.

Thanks for commiserating @khkey I seriously think someone will get hurt in SF Bay Area in the next month. I experience 1-2 ride ragers per day now and I’m actually a pretty courteous driver. Bring slower and very courteous helps me cope with the new road culture. I’m driving in the right lane from now on- and going the speed limit. That way there will be no confusion about expectations. Anyways… a little off topic probably.