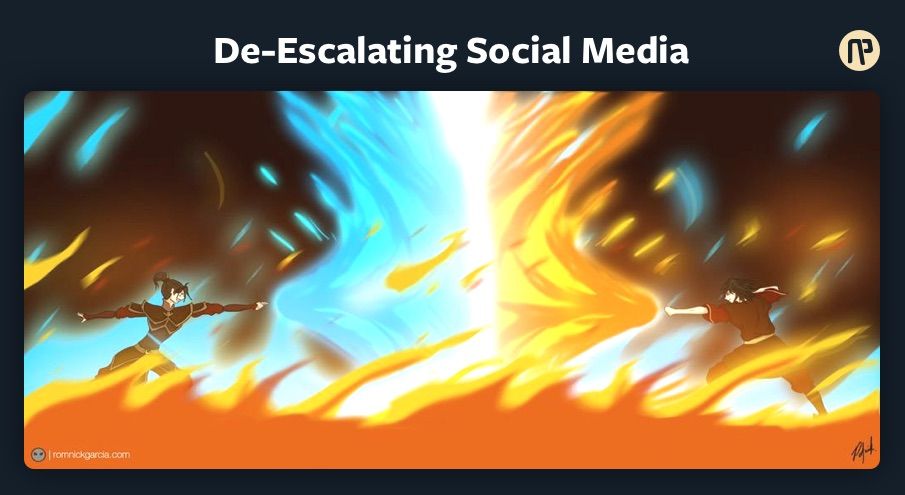 Social media has a conflict problem.

Spending even a few minutes on public social media can expose us to dozens of people we know little about, talking about things we know little about. In such a public place, any individual’s reputation, perspectives, and history are difficult to ascertain, and therefore their words must be taken at face value. Coupled with an almost complete lack of standards for participation in the community and a high degree of variance in knowledge among participants, and the environment naturally skews toward conflict and tribalism.

One particular effect of this environment is that small misunderstandings, mistakes, or disagreements can unexpectedly explode due to the public nature of discourse and assumptions of bad faith. Meanwhile, very few tools exist to moderate these effects.

This is why it’s my belief that as designed today, social media is out of balance. It is far easier to escalate than it is to de-escalate, and this is a major problem that companies like Twitter and Facebook need to address.

This got me thinking about what particular use cases need de-escalation, and whether there’s something simple we can do to test the waters and address these types of problems.

The article has three good suggestions that social media apps can easily incorporate into their design. Kudos for the excellent work!

The following is my point of view:

I see a problem with social media. They manipulate people through addictive design so they can better serve their interests. For example:

We need more regulations to deal with this. Maybe social media should be treated like alcohol or cigars, and someone needs to set the limits to these companies. We’re talking about protecting children and teens from Wall Street investors.

Conflicts on social media are a problem, but they’re not on that previous list, because their roots are not in social media.

Reading the article, I felt like reading about highway patrol police tactics for busting speeding cars on the highway. Should we use road cameras? Should we place disguised police cars hidden before road turns? Or should we make people who are speeding record audio saying “I made a mistake”?

And we know that barely works, right? Speeders don’t give up speeding because they slow down when going through a road camera. Does getting a speeding ticket make an idiot less idiot?

So the problem with internet conflicts is that they are the mirror and amplifier of how messed up many people are right now as human beings. No design tweak will fix that. I’m sorry.

There is no easy solution, and progress needs to measured in decades, not years. But we could start by fixing our educational system and economy. Both are badly broken, and someone with granted powers needs to stand up for the cause and reinvent then from scratch. And before you say that’s not possible, think again. There are amazing people out there working on this right now. There’s still hope.