Videos known as deepfakes use artificial intelligence to manipulate appearance and voices of individuals.This one a stunt on Mark Zuckenberg boosting on his power and is meant to appear like a legitimate news program. This fake video is a commentary of the collection and use of private data by tech companies. And it also put facebook and instagram content moderation policies to the test. This doctored video of Zuckenberg shows that ai manipulated video can be used for disinformation or fake news.

Top AI researchers on deepfakes. “We’re not ready” There are concerns deepfakes might be deployed to manipulate political election.
https://www.washingtonpost.com/technology/2019/06/12/top-ai-researchers-race-detect-deepfake-videos-we-are-outgunned/?utm_term=.9b755a479bec

First time I saw this in practice was the movie Rising Sun. That was 1993. This has been around a long time. The only thing new about it is the fact it is being regurgitated across social media currently ad nauseam. I think if the people in society that believe most or any photo or video presented by media or government to be real they are fooling themselves or naive at best. The post apocalyptic dystopian propaganda machine in The Running Man movie used the same idea and that was released in the 1980’s. The book it’s based on by Phillip K Dick is much older.

Hollywood studios with a lot of resources can generate almost anything through computer generated imagery. But soon with the emergence of deepfakes, convincing fake videos will become widespread. Disinformation will not only happen through words and pictures but through fake videos as well. Maybe social media tech companies creating effective fake video detector and as well as people best equipped with this kind of job, journalist tracking the creator of the video may expose the lie. Knowing the origin of the deepfake is just important what it shows.

My dad and I were talking about this earlier. This was also used to spread fake political endorsements through editing videos of celebrities. Unfortunately it is being played off as a clever joke/prank on many sights. The first time I saw this I was actually convinced, which is the truly terrifying part. Thank you for bringing this up in the forum @richard1!

Wapo has produced a guide that attempts to help people spot fakes.

In addition, it invites readers to submit fake videos: “This page will update with new examples as they emerge, so if you see a suspicious video, send it to us using the submission form below.” 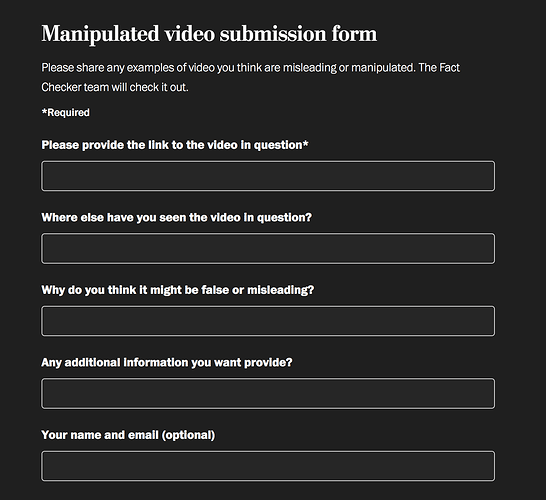 The Internet is increasingly populated with fake and misleading videos — spread by politicians, advocacy groups and others — viewed by millions. The Fact Checker has created a universal language …

A look at the larger problem:

Misinformation is everywhere. These scientists can teach you to fight BS.

Practical advice about how to spot and call out BS

This is worrying because media like audio and video is much more convincing than text as hearing and seeing it ourselves seems like being in a conversation directly with the person. Once a technology is advanced to a certain level, it falls prey into unethical hands for malicious purposes…
I think deepfakes not only raise concerns about misinformation but also those about other unethical acts such as online phishing and swindling. It reminds me of a startup called Modulate. They give you the freedom “to sound however you want, wherever you want, online.” Imagine someone uses this technology to sound exactly like your close friend or loved one to ask for sensitive information. It’s completely different from doing so by text…The co-founders of Modulate once explained in a podcast interview that they will add a unique watermark to every voice that’s been altered with their technology in order to address the ethical aspect of it so you can find out whether a voice is authentic or not. However, I feel as technology advances so fast, there will be people quickly catching up and coming up with a version on their own. Many times, we are dealt with the problems or unintended consequences in the aftermath and fix the problems. Ethics, although being so complex itself, is usually not paid enough attention to when a new technology is developed.

I was reading about how this has already been used to sway elections in sub saharan African countries so much facebook banned 50 people for it. They held over 150 pages and fake accounts and used them to attribute falsehoods to candidates as if said candidate endorses same position or they are echoing an unpublished statement, anything to sway polls.

None of the 50 people behind the pages have ever lived on the African continent then or ever, they work for private hacking firm and were paid anon.